More and more people are adopting a vegan diet all the time, and for good reason! People are compelled to cut out animal products from their diet (1) for personal health reasons, (2) for environmental reasons, and (3) in order to help bring an end to the unnecessary suffering of billions of animals. I went vegan in 2011 and never looked back. The transition to a vegan diet was easier than I thought it would be, and I now love cooking and eating more than ever. I truly believe making the decision to go vegan was one of the best decisions I've ever made.

Read below for the three most compelling reasons to go vegan.

VEGAN DIETS HAVE CONSISTENTLY BEEN SHOWN TO REDUCE THE RISK OF AND EVEN REVERSE HEART DISEASE, CERTAIN TYPES OF CANCER, HIGH BLOOD PRESSURE, TYPE 2 DIABETES, AND ASTHMA, AND REDUCE THE RISK OF GALLSTONES, KIDNEY STONES, AND OSTEOPOROSIS.
Physicians Committee for Responsible Medicine

MORE FACTS FROM THE FILM WHAT THE HEALTH -->

​ANIMAL AGRICULTURE IS RESPONSIBLE FOR 18 PERCENT OF GREENHOUSE GAS EMISSIONS, MORE THAN THE COMBINED EXHAUST FROM ALL TRANSPORTATION.
"Livestock's Long Shadow: environmental issues and options". Food and Agriculture Organization of the United Nations. Rome 2006

MORE FACTS FROM THE FILM COWSPIRACY-->

This was my initial reason for going vegan. When I first heard about how much water it takes to produce a single hamburger (660 gallons), my initial reaction was complete disbelief. I did some research and some more research, and finally realized that my animal consumption was a true environmental problem, using far more water than taking a daily shower (just 17 gallons per shower) and far more land than the plant foods I was eating. I learned that filtering plant protein through the bodies of animals is incredibly inefficient. This is how it works: Vast amounts of feed crops are grown and then fed to livestock. Copious amounts of freshwater go directly to livestock for drinking and cleaning, and indirectly for watering the feed crops. Livestock also produce large amounts of manure that must be disposed of, and it's not treated like human sewage systems so it ends up getting sprayed directly onto crop fields and running off into streams, rivers, and lakes with devastating consequences. Livestock also produce an insane amount of methane (which is much more destructive than CO2). Add to all this the ridiculous amount of land that is needed both for grazing and for growing the feed crops. If we just directly consumed the plants, we would avoid this catastrophic process.

Once I understood these facts, I realized that avoiding animal products was the single most important thing I could do to help the planet. Going vegan was a more sustainable behavior change than recycling, reducing my household water usage, switching out all my old incandescent light bulbs, or switching to a hybrid car. And plus, this was easier than other behavior changes that I knew would help the environment (like refraining from ever driving a car or taking a commercial flight, going without a smartphone, or powering my home with solar/wind energy to get off the electric grid). I could make these other changes, but they would be much more difficult for me in this modern age. Conversely, going without animal products is easy in any part of the world that has access to abundant plant-based foods. It seems like a no-brainer that any environmentalist would go vegan, but there are many social and economic pressures that have kept environmental organizations from endorsing vegan diets. I'd recommend watching the documentary Cowspiracy (available on Netflix) to learn more.

OVER 56 BILLION FARMED ANIMALS ARE KILLED EVERY YEAR BY HUMANS. THESE SHOCKING FIGURES DO NOT EVEN INCLUDE FISH AND OTHER SEA CREATURES WHOSE DEATHS ARE SO GREAT THEY ARE ONLY MEASURED IN TONNES.
http://www.animalequality.net/food

MALE CHICKS BORN INTO THE EGG-LAYING INDUSTRY SERVE NO PURPOSE, SO ARE ROUTINELY KILLED ON THEIR FIRST DAY OF LIFE BY BEING SUFFOCATED, GASSED, OR MINCED ALIVE.
http://www.animalequality.net/food

DAIRY COWS ARE FORCIBLY IMPREGNATED EACH YEAR, AND THEIR CALVES ARE SEPARATED FROM THEM SHORTLY AFTER BIRTH, CAUSING MUCH STRESS AND GRIEF TO BOTH MOTHER AND CALF. MALE CALVES BORN IN THE DAIRY INDUSTRY WILL NOT PRODUCE MILK, SO THEY ARE EITHER IMMEDIATELY KILLED OR BRIEFLY RAISED AND SLAUGHTERED FOR VEAL.
http://www.animalequality.net/food/milk

PIGS RAISED FOR MEAT ENDURE A GREAT DEAL OF PSYCHOLOGICAL STRESS IN ADDITION TO THE PHYSICAL STRESS OF A LIFE OF EXTREME CONFINEMENT AND BRUTAL SLAUGHTER.
http://www.animalequality.net/food/meat
PIGS ARE MORE INTELLIGENT THAN DOGS OR THREE-YEAR-OLD HUMANS. THEY CAN RECOGNIZE THEMSELVES IN THE MIRROR, AND THEY CAN QUICKLY LEARN TO OPERATE LEVERS AND SWITCHES TO OBTAIN FOOD AND WATER AND TO ADJUST AMBIENT TEMPERATURE TO THEIR LIKING.
http://m.humanesociety.org/animals/pigs/pigs_more.html

CONTRARY TO WHAT MANY PEOPLE THINK, FISHES ARE INDIVIDUALS WITH THE CAPACITY TO EXPERIENCE PLEASURE AND PAIN, AS CONFIRMED BY NUMEROUS SCIENTIFIC STUDIES.
http://www.animalequality.net/food/meat


THE AVERAGE SHRIMP-TRAWLING OPERATION THROWS 80 TO 90 PERCENT OF THE SEA ANIMALS IT CAPTURES OVERBOARD, DEAD OR DYING, AS BYCATCH...SHRIMP ACCOUNT FOR ONLY 2 PERCENT OF GLOBAL SEAFOOD BY WEIGHT, BUT SHRIMP TRAWLING ACCOUNTS FOR 33 PERCENT OF GLOBAL BYCATCH.
Foer, Jonathan Safran. Eating Animals. New York: Little, Brown and Company, 2009.

I've often heard people argue that we should put humans first and that there are too many human rights issues going on right now to worry about animal rights. I agree that racism, sexism, child abuse, extreme poverty, worker exploitation, criminal justice atrocities, hate crimes, and violence of all kinds are rampant all over the world and that we should do whatever we can to help bring an end to these problems. However, I don't see how individuals adopting a vegan diet and advocating for greater animal rights hinders progress in human rights movements. If anything, transitioning to a vegan diet helps to alleviate human suffering. Here are some examples:

How to make the transition 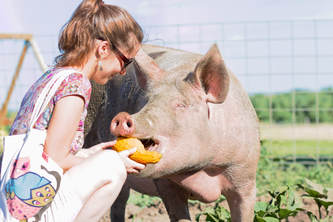 Sharing a squash with Winnie at Heartland Farm Sanctuary
If you already enjoy vegan meals and are convinced by the reasons above, going vegan will be easy. Each person may have a different approach, but with strong commitment and some time, any positive personal change is possible. Some people prefer to drastically change behaviors overnight (like jumping right into a cold pool) while others prefer to switch behaviors more gradually (like easing into the pool one step at a time). You just have to choose what works for you, but always keep the end goal in mind throughout the process.

For me, cutting out meat was easy. I had already been eating some meatless meals, and like I said earlier, the meat on my plate was often only there because I thought I needed it in order to be healthy. During a period of a few weeks, I ate entirely meatless at home and tried out ordering meatless meals at restaurants, and it was easier than I thought it would be. I had fun trying new foods, and I began noticing the flavors of familiar foods more, particularly herbs and spices. Within a month or so, meat didn't even seem like food anymore.

Getting away from dairy was much more difficult for me. My digestive system had no trouble with dairy, and cheese was one of my favorite foods. I even thought cheese was good for me because I never drank much milk and thought I needed to get my calcium somewhere! After becoming convinced that I didn't need dairy for calcium and that it was actually detrimental to my health, I certainly paid attention and did what I could to avoid it. But it took many months for dairy to become the "non-food" that meat had become. During my first year of trying to lead a vegan lifestyle, I consumed dairy about five times, each time out of convenience or in stressed social situations (I was using the term "vegetarian" or sometimes "strict vegetarian" at the time because I was worried that "vegan" sounded too extreme). Each time I consumed dairy, I didn't feel that bad while I was eating it, but I felt bad afterwards. It's obvious that something was going on subconsciously because I still remember each of those situations vividly. I finally got over it, started using the term "vegan", and decided never to consciously consume dairy again, and I've felt so much better since.

Life is more meaningful for me when my actions are more closely aligned with my values. Since going vegan, I've visited a few farm sanctuaries that house rescued animals, and meeting those animals is an entirely different experience than meeting the livestock at the state fair. I can see these rescued animals not as mere objects, but as individuals with personalities and preferences. I can look into their eyes the way I look into my dog's eyes and recognize not just something, but someone.

See the Resources page for great guides to help you every step of the way, including a 22-day vegan challenge with free guidance from professional clinical dietitians and vegan mentors, plant-based nutrition facts, tips for dining out, and how to advocate for farmed animals.